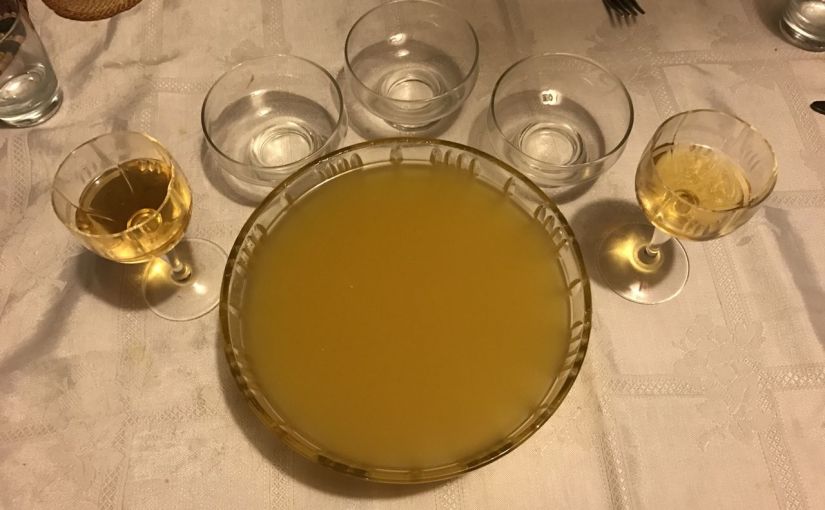 On 7 January 1876, Whistler held an eight-course banquet. The menu reads:

That is, being interpreted: oyster soup, ‘Agourtzies’ (pickles), oven-baked cod with potatoes, hare force-meat balls, pheasant meat-balls, beefsteak in the Parisian style, orange jelly, pastries, cheese omelette, coffee. It is a pity that we do not know who was the recipient or focus of this entertainment. Perhaps it was a New Year celebration.

Whatever the occasion, we mean to return to the more elaborate sections of this menu at a later date, and concentrate today on the dessert, partly because, having eaten lavishly ourselves since Christmas and through the New Year, the desert is appealingly simple. Or it was, until Helen tried to make it!

While Helen was checking the recipes, I did some more research on the menus. It seems that Gelée d’Orange was a prime favourite with Whistler and presumably with his cook. It appears frequently, and both with simpler meals, and with lavish ones. An example is one on 3 May 1876:

In April 1876 Thomas Jeckyll had consulted Whistler about the colours for the dining room he designed for the Liverpool ship-owner F.R. Leyland. Eventually, with the addition of Whistler’s extensive decorations, this became Harmony in Blue and Gold, The Peacock Room. So in this year he and Whistler were closely associated, as friends and colleagues. Albert Moore and Whistler had been friends for over a decade (his paintings did not on the whole include food, just beautiful people in classical robes reclining sleepily – possibly after such a repast). Tissot was an old friend from Paris, who had made contact again on fleeing to London in 1870. He was becoming successful and his friendship with Whistler did not survive the 1870s. 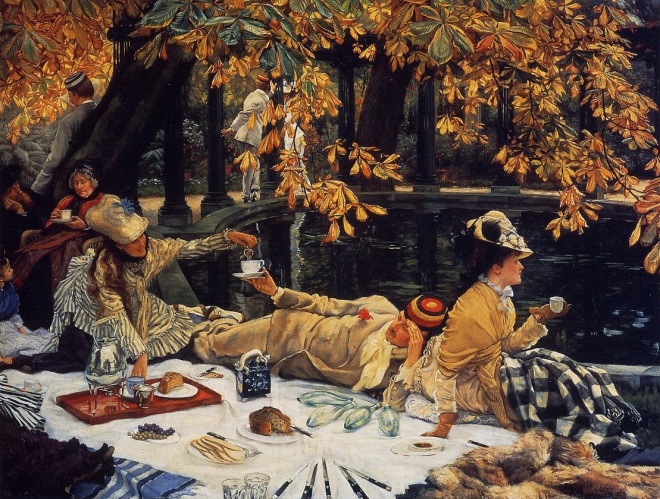 In 1876 Tissot painted a striking canvas of a picnic in his garden in the wealthy north London suburb of St John’s Wood. Holyday is currently on view in the Tate’s Impressionists in London. The elegant repast included grapes, sliced meat, pie and cake, lemonade and tea poured from a magnificent silver pot. It was in its way as elegant as Whistler’s dinner, served as it would have been with blue and white china, cut glass, white linen, and silver cutlery, and rounded off with plates of delicate desserts and coffee.

Take some fine soaked and blanched calves’ feet, and set them to cook in one and three-quarters pints of water apiece. Skim as thoroughly as possible; cover, and then cook very gently for seven hours…

A Guide to Modern Cookery, A. Escoffier

Helen writes: Thankfully Escoffier concedes that ready-made gelatine may also be used; Mrs Beeton calls for isinglass in the Book of Household Management, but our trusty 1960s edition uses gelatine in the same quantity. That quantity, however, seems very large – an ounce per quart of jelly for Escoffier, 1 1/2 ounces for Mrs Beeton. With modern leaf gelatine, you’re generally recommended to use 1 leaf per 100ml – for a quart, slightly less than 1200ml, that means 12 leaves – a 25g pack contains 15 leaves, so an ounce and a half would be something like 25 leaves of gelatine. I did find some suggestion that acidic fruit juices need more gelatine, so I erred somewhat on the side of caution, using 15 leaves of gelatine. The resulting jelly set perfectly, but we didn’t quite have the nerve to turn it out from the bowl – if we manage to find our jelly moulds, I may try the recipe with something closer to Escoffier’s ounce of gelatine.

Both Escoffier and Mrs B call for 1/2 lb of sugar, which I was quite happy to go along with until I started to measure it out, and blanched at the sheer volume of sugar that amounts to. Halving it, as per the later version of Mrs B, while not authentic to the Victorian palate, does result in a lovely, delicately sweet jelly. (I may try it again with the authentic ratio).

1/2 lime (Seville oranges not being in season)

9 oranges (more or less – to make 1 pint of juice total, including the other citrus)

In a pan, combine the pint of water with the sugar, the rind of one orange and the rind of half the lemon. Bring to the boil, then let simmer, stirring occasionally. (Escoffier and Mrs B also call for the gelatine or isinglass to be boiled, but this isn’t recommended for leaf gelatine). If any scum rises to the top, skim it off (I didn’t find any need to do this).

Soak the gelatine in cold water for 5-10 minutes until it’s – for want of a better word – squidgy. (Make sure the leaves of gelatine are completely separated). 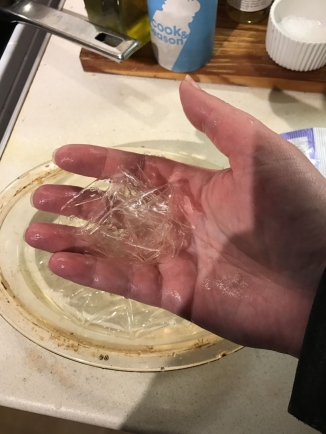 When the gelatine is soft, take the syrup off the heat, squeeze the excess water from the gelatine (squidgy!), and add it to the syrup. Stir the mixture until the gelatine has dissolved, then strain it into a clean bowl or jug. (For this and straining the fruit juice, I used a muslin cloth, but you could perfectly well use a fine sieve).

Strain the juice of the oranges, lemon and lime into the jelly base. (This is a lot simpler if you have a juicer, or someone to juice your upwards of half-a-dozen fruit, while you make the jelly base – but as long as the jelly is still warm, the juice should mix in fine).

Make sure the juice and jelly base are well mixed, then pour into your serving bowl or mould (if you do want to turn it out from a jelly mould – or even the bowl – I’d recommend using more gelatine, and remember to ‘wet’ the mould before use with a neutral oil so it doesn’t stick).

Remove any bubbles from the surface, and leave to set (I’m not sure how long this took – certainly it set overnight in the fridge).

THE GARNISH AND ACCOMPANMENTS OF JELLIES

As a rule, jellies are served plain. Sometimes, however, they are garnished with variously-shaped, stewed fruits, symmetrically distributed in the jelly, with their colours nicely contrasted.

A jelly prepared in this way is called a “Suedoise of fruit.”

A Guide to Modern Cookery, A. Escoffier

As Whistler does not refer to it as a Suedoise, we left it plain 🙂

Other ways to serve the jelly include hollowing out the orange peels to use as bowls – or even hollowing out whole oranges, filling them with jelly, then cutting them in quarters to serve – as with using a mould, this would call for a stronger set than ours!

Our jelly was a lovely, delicate colour, with a fresh taste of orange. 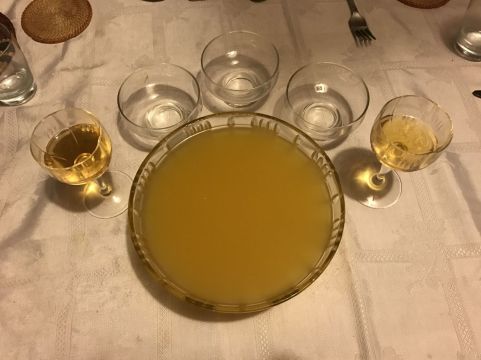 And finally: Whistler did paint oranges!

Early in 1884 – between January and March – Whistler stayed in St Ives in Cornwall. Despite the cold and breezy weather, he painted vivid seascapes of stormy seas, and small dark studies of the narrow streets and little shops of the old town. One of these was An Orange Note: Sweet Shop. A child and a young woman with a baby stood in the low doorway of a dark shop, and in the window, oranges formed a glowing centrepiece.

This painting was mentioned frequently and favourable in reviews of Whistler’s one-man exhibition at Messrs Dowdeswell’s in 1884. The Artist raved about the painting, finding it ‘Perhaps the most remarkable … a simple subject – a doorway, a tiny shop window piled with oranges and cakes, a shelf full of bottles containing lollipops, … but for tone and wonderful breadth of detail, … this little gem can hold its own with canvases a hundred times its size’.

Another critic commented: ‘The “Sweet Shop,” a pile of oranges forming the key-note of colour, is an exquisite little work of its kind’. The Globe displayed modified rapture: ‘the little “Sweet Shop” with a pile of oranges in the window’ was among several ‘admirable studies, most harmonious in tone, produced with little apparent labour, but conveying an impression of competence.’  And the Topical Times critic wrote appreciatively: ‘…of the oils my fancy was struck with “An Orange Note.” It is only a “sweet shop,” but there is both harmony and humour of a subtle sort in it.’ Finally the art critic Frederick Wedmore (1844-1921), writing in the Academy, commented, ‘…when Mr Whistler speaks it is because there is something fresh to be said …perhaps it is only the bottles of pear-drops and bull’s-eyes and the pile of oranges in the shadowed window of a Chelsea [sic] sweet-shop… In any case it is fresh or freshly seen, and in almost every case it is set down engagingly … Mr Whistler has not to do with what is called imagination; he has to do with the vivacious record of sometimes trivial fact.’

The great American collector Charles L. Freer snapped up this work, and it hangs today in the Freer Gallery of Art, a tiny masterpiece.

I am an artist and art historian, and my research is focussed on the work and life of James McNeill Whistler. Based in the School of Culture and Creative Arts, University of Glasgow, I am Director of the Whistler Paintings and Etchings Projects. These blogs are informal, and, I hope, interesting and even quirky discussions of individual works and events related to Whistler. View all posts by mfmmacdonald